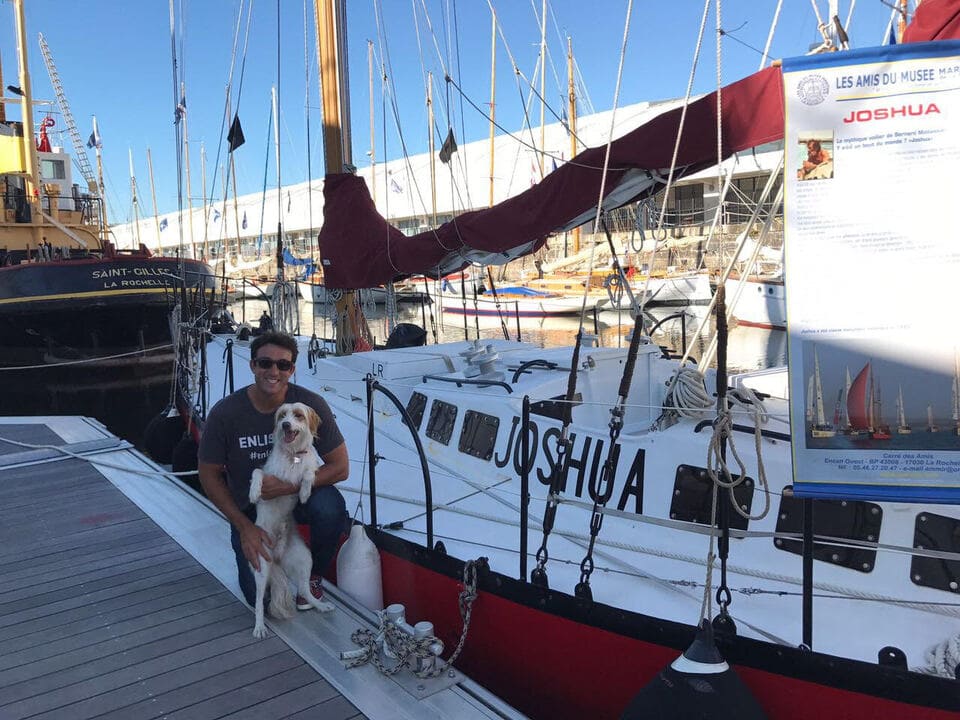 Welcome to the second article of our series, La Belle Histoire. Thanks to our business, we get to meet amazing entrepreneurs whose passion, dynamism and determination never fail to impress us!

For this new episode, we had a chat with Alan D’Alfonso Peral. Unconditional lover of rugby and sailing, he draws inspiration from his passions to raise awareness and educate people about the dangers of water pollution.

We talked about his career, from his early years in Argentina to the creation of his French start-up. Through a good dose of ingenuity and a lot of tenacity, he has invented a revolutionary system: the first marine vacuum cleaner!

Alan, you were born in Argentina. Can you tell us more about your journey from South America to France, as well as your passions?

From a very early age, I have always been in contact with the sea and sailed and raced with my father. I was steering my first optimist at the age of 7!

Later, I started studying radiology and in 2003, my father (also a radiologist) and I decided to open a franchise of clinics where we could perform 4D ultrasounds.

At the age of 18, I flew to Johannesburg, South Africa, with the under 19 Pumas rugby team of Argentina. Rugby had always been a passion and my international selection materialised years of training.  For me, this sport represents a way of life that conveys true values. Though, in my native country, only doctors, engineers or lawyers could play rugby. It was a very expensive sport that not everyone could afford. I arrived in South Africa just 5 years after Apartheid and it was the first time I was confronted with racial segregation. It was a really tough experience.

I then briefly went back to Argentina to continue my medical studies. But rugby was still very present in my life and in 2007, I had a lot of friends playing at a national level, the Rugby World Cup was hosted in France and one of them said to me: “Alan, there's a team in Guéret looking for a second line. They will pay for your flight ticket. Play a few games with them for 3 months, and then come watch the World Cup with us!”

The team in Guéret made me feel so welcomed that I decided to play with them until the end of the season. This meant taking a break from my studies, to the despair of my mother...! At the time, all I wanted was to play rugby and discover the world. I joined a team in the Paris region and, at the same time, opened a tapas bar 50 meters from the Louvre. It was magical and the bar was doing very well, but I was much more of a sportsman than a night bird!

At the end of 2010, I stopped everything and went back to Argentina again. I had earned some money and felt ready to finish my medical studies. I still had 8 months to do to become a radiologist, but I missed France, Guéret and my friends.

After a few seasons as a professional rugby player, my passion for sailing quickly got the upper hand. So, I bought a boat and started sailing in the Mediterranean Sea, alone. I needed to think. A year later I decided to move to Lyon, then Vienna, always for my love of rugby.

You are a real globetrotter! And it is precisely this adventurous mind that helped you become aware of water pollution, isn't?

I wanted to live new experiences, and that's still the case! Sailing the seas and oceans gave me the opportunity to have many different jobs which was amazing! I returned to Argentina in 2010 by motorboat.While crossing the Atlantic, I was shocked to see so much waste on the surface of the water. The worse is that 75% of this surface waste will sink deep. It's a global disaster.

One day, as I was diving with some rugby friends, I decided to create the association Recyclamer. I wanted a way to raise awareness and educate future generations.

Thanks to the association, we managed to clean many beaches and ports in France and Spain. However, this cleaning up was a difficult task. In the ports we were diving in, we had to manually pick up the garbage with our hands sometimes without being able to see the bottom of the sea!

To help our mission, we parked the association boat in the port, installed flags and information booths, as well as TVs to show real images to children.

You've pushed your clean-up actions even further to protect ocean ecosystems and created a technological gem: an aquatic vacuum cleaner! How did you do it?

Cleaning was good but we needed to find a system to collect the waste before it sank deep. I searched the Internet, but found nothing.

The only option was the recovery of floating waste with a net on a motorboat. So, I decided to get in touch with a professional high school where I had worked. I told them I wanted to create a solar powered system that could filter water and trap waste on the surface of water.

“Invest in this project! I am confident it will be very successful!” That's what I told investors.

I had the perfect idea but didn't know how to achieve it. That’s when I decided to buy solar panels and all the components. One of my rugby friends gave me a hand to build my first “sea trash bin”. I was really excited! Not only it was a new way to collect waste without polluting, but also because I knew this innovation would be revolutionary!

It took us about 8 months to create the prototype from the initial idea to the patent application. Once done, we embarked on a second round of the ports we had already cleaned to do a more in-depth work.

Little by little, the media got wind of our innovation. I started receiving calls from other ports wishing to buy our system, as well big companies looking to mechanise our product.

This is how I got in touch with the University of Limoges and the Ensil, an engineering school. My prototype was great but I knew I needed to develop the concept more before marketing it and that’s what I did with their help.

That's how Recyclamer, the first robot solar energy self-sufficient capable of collecting solid and liquid waste (thanks to an innovative suction system) was born.

One the side of your awareness-raising activities, you have transformed your association into a start-up. That must make you proud, right?

In July 2018, I created my company of which I am still the President. At the time, I was the only partner. Today, we are several to lead.

My dream goes on, I continue to clean, educate and raise awareness. It's incredible, as soon as the robot is in the water, everyone starts looking at this small, non-polluting, perfectly autonomous device. Arousing such curiosity and interest makes me really happy. Yes, I am proud of my product!

“I have a daughter, and I don’t want her to come to me in 30 years and say: Dad, what did people do to nature?”

This is part of the reasons why I want to continue my mission of awareness. It is essential to educate the younger generations and make them understand that they must protect the environment.

An aluminium can takes 100 years to biodegrade in the sea. And 450 for a plastic bag. Does the Recyclamer have sufficient capacity to suck up all this waste?

This is a very good question. At the moment, Recyclamer is only available in size S but I am working on size M and aiming to put it on the market by 2020.  The dimensions of size S are 1m40 x 90cm meaning we can only collect about 200 litres of waste. Recyclamer can suck everything from cigarette butts to aluminium cans, plastic cups, plastic bags, oils spills and so on!

The only other way to do this is with robotic nets equipped with two floats. But they can only move forward and can’t backtrack because the waste would come out of the net. They don’t trap oil spills either.

I want to get to size L to put it in the open sea and do a real in-depth work. During an oil spill for example, we can define the area to be treated using a GPS, then send our Recyclamer work autonomously. No staff needed, our sea robot can work on its own and just from solar power.

In our 4,300 square feet workshop and thanks to a dedicated team of twenty people, we can assemble and deliver all our vacuum cleaners. Being close to Vienna is also very helpful to perform our tests. We really have an ideal setting to carry out our projects and ambitions.

Rugby is very important in your life and it seems to be a source of true natural leadership!

I do talk a lot about rugby! For me, it conveys many values, including respect for the team members and the coach. We are 15 players on the pitch and we have one captain who makes the decisions. If we don’t play together, we can’t win. I was captain in all the professional teams I played in, and sometimes coach too. I don’t know why, but people tend to follow me easily! I continue to play rugby. This sport has given me a lot and I still have a lot to give. Transmitting the right values to the younger generations is very important for me

Can you tell us about your competitors?

We have two direct competitors. “Jelly boat fish”: a simple solution controlled by radio. The difference with us is that it works with electricity and that is precisely something I wanted to avoid when creating the Recyclamer. I wanted an innovative system that attracts attention and cleans without polluting.

Our second competitor is “Wayshark”. Created at the end of 2018, it is a Dutch company that came up with a net system, but it is not yet autonomous. It can't go backwards, the basket is very hard to empty and it is not adapted to ports.

The advantage of the Recyclamer is that we knew exactly what we wanted from the start. We had already cleaned up this stagnant water with the association and I had been hanging out in the ports since I was 7! I had always seen the difficulties encountered by the people who collect. We have developed the Recyclamer with the users in mind, doing our best to simplify their task.  How are we going to empty the basket? What training will the users need?

“We are happy to have competition, it shows that there is a market!”

I am convinced that the Recyclamer is a superior robot on all points. And, I’m not the one saying that, the customers do! Today, we have orders beyond the borders of France. They come from Italy, Spain, Belgium, the Netherlands and even England. I want to grow my team and open our company to the world. We have decided to develop in the Asian market by the end of 2019.

Once the bigger sizes of the Recyclamer are done, what will you do to continue satisfying your vocation to protect nature?

Well, the development of the bigger sizes will take another 3 or 4 years. I also want to continue raising awareness. I want to keep travelling with my sea robot. The more ports it cleans, the less waste reaches the ocean. It's my contribution to the planet, and it's a real calling! 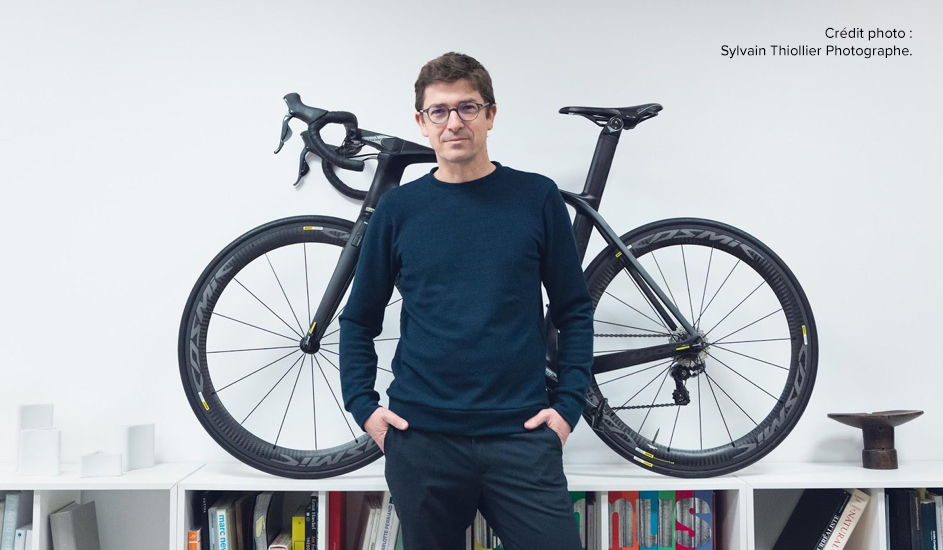 The Discreet Influence of Industrial Design by Patrick Jouffret