A French take on SaaStr Annual, the world’s largest conference of online softwares

SaaStr Annual, the largest gathering of SaaS type software companies, was held in San Francisco from February 3rd to 7th.

With more than 10,000 visitors, it is the biggest event of its kind in the world, the CES of its field.

In the company of our fellow French friends, Algolia and Aircall, we decided to show the Americans what kind of fire we startups are heating up on the other side of the pond- especially Sellsy. And let me tell you, we were not disappointed. It was a short one week trip... refreshing, with fall-like weather.

At the turn of the 2000s, notably with the creation of Salesforce, SaaS (Software as a Service) was introduced, consisting of distributing software on the Internet. 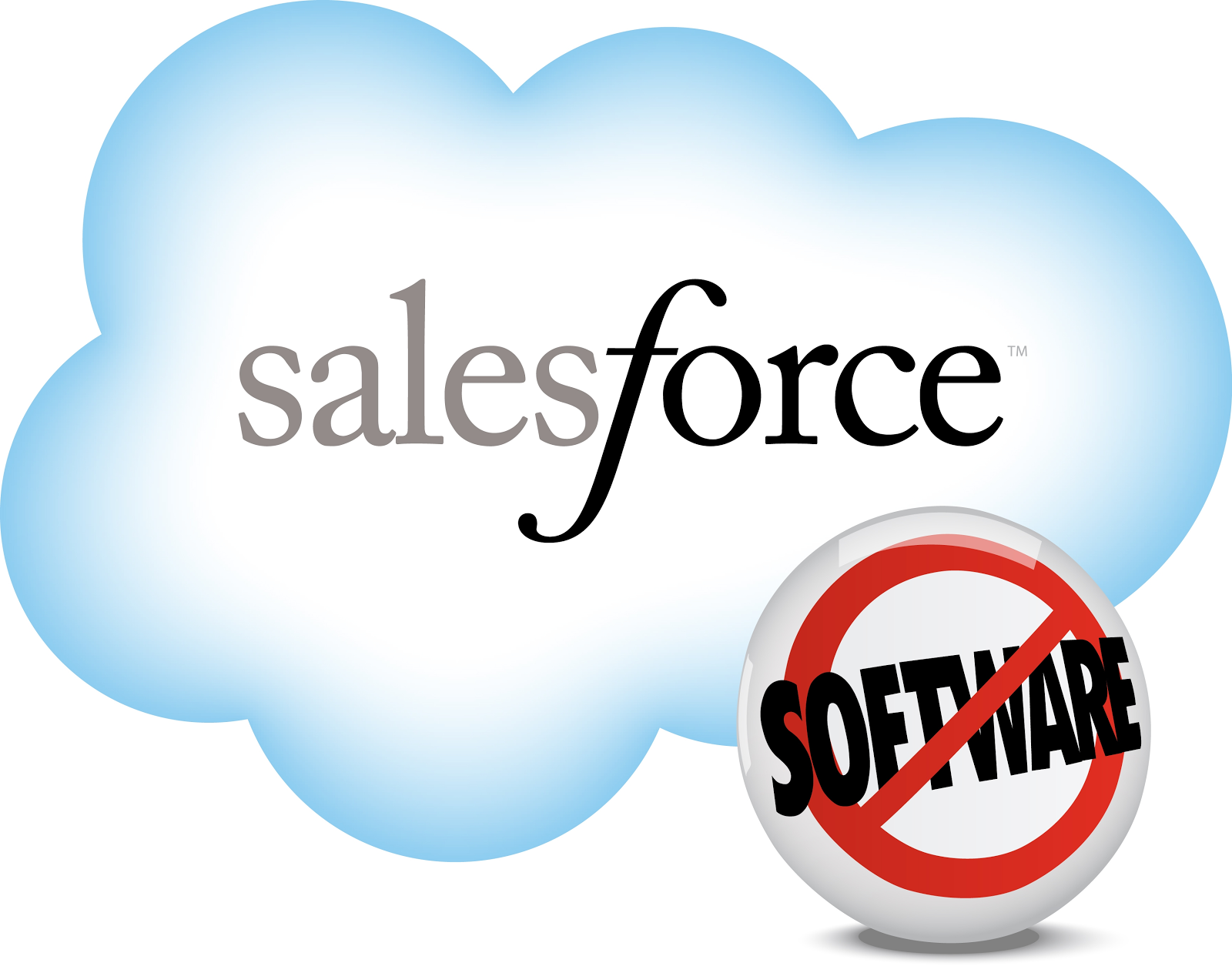 Everyone could envision Salesforce’s famous logo, which condemned the idea of installing software internally on the servers of the company.

From then on, it has become a powerful wave, with notable actors such as Google Gsuite (formerly Google Apps) and Office 365, the online version of the famous suite of Microsoft Office.

At a time when we, as people, do not go far from our laptops and are becoming more and more accustomed to digital technology, the SaaS system is a logical sequence that allows companies to adapt to our new modes of communication, often in real time.

In the heart of San Francisco and a footstep away from Silicon Valley, SaaStr Annual allows for thousands of players in the field to gather together in the same place.

Full of founders, investors, lawyers, CTOs, CFOs, COOs, CEOs, and C-other things, it was a real parade of what counts in the universe of online software, and of course, always with the warmth of the American communication style.

The conference, located in a Zenith-style concert center, is above all, very business-oriented, with many headliners. 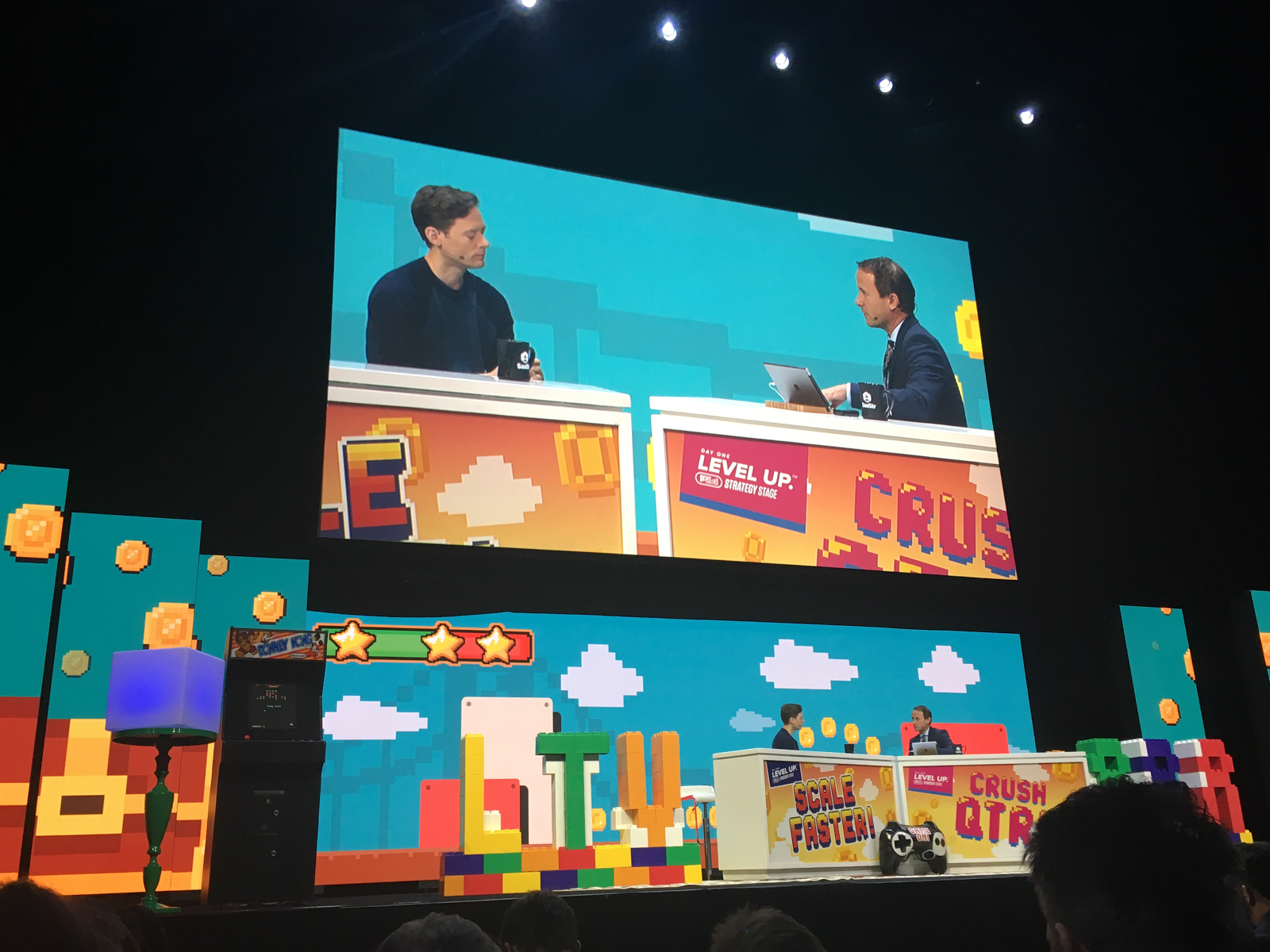 The conferences are split into two parts. The main scene is where you find stars such as Michael Pryor, founder of Trello, who just sold his startup to Atlassian for $ 450 million, or Mikkel Svane, founder of Zendesk, who tells us about his beginning and the incredible success story of his startup.

Just beyond these conferences, are two other rooms with numerous experts devoted to specific themes among a wide range of different subjects. 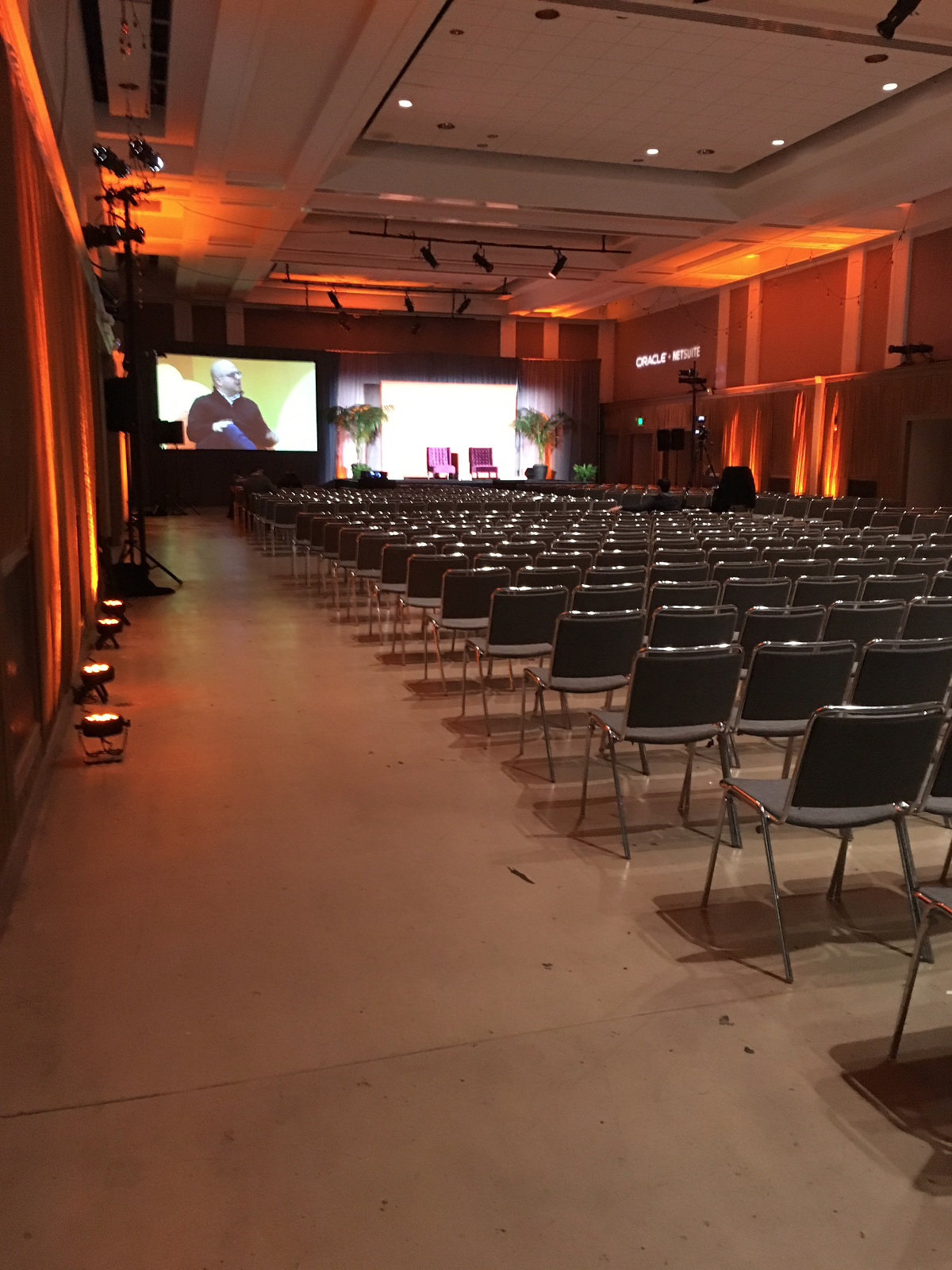 This is one of the "small" rooms before the battle, the size of a indoor soccer field, but bursting full during the sessions.

The panels are of a very high level and most speakers are contagiously passionating (but okay yeah, everybody finds a little dullness here and there, nothing's ever perfect).

Everyone who has lived the blessed time of LeWeb in Paris will understand the folly of the place: the services were ready at the same time everyday. Breakfast in the morning, bar and buffet at lunchtime, happy hour from 4:30pm to closing with open bars and appetizers... 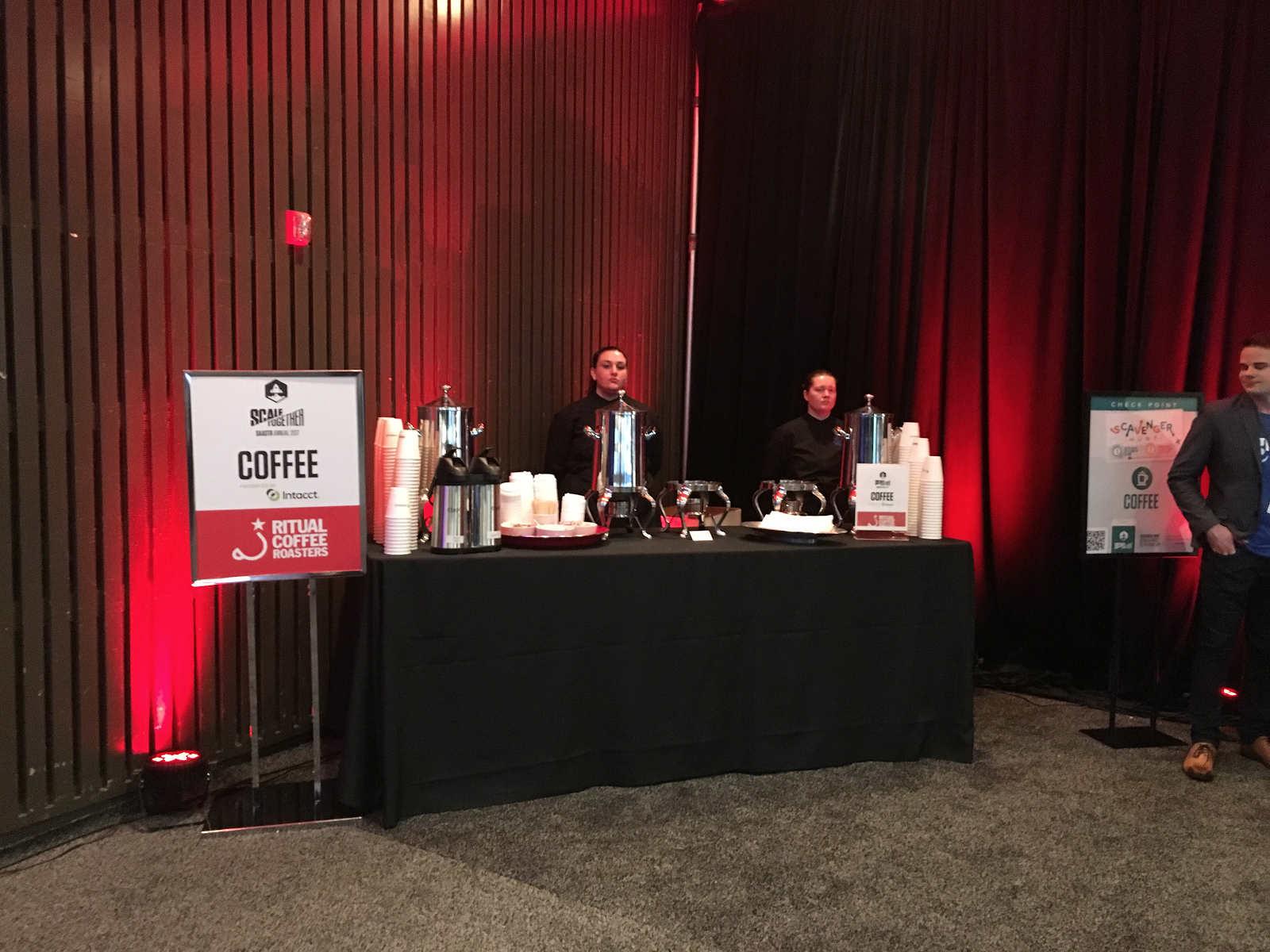 And all this for 10,000 people for three days straight! The logistics deployed were impressive and flawless. People asked me a hundred times if I was "happy today?". It may seem a bit much, but so is the Castle of Versailles :) 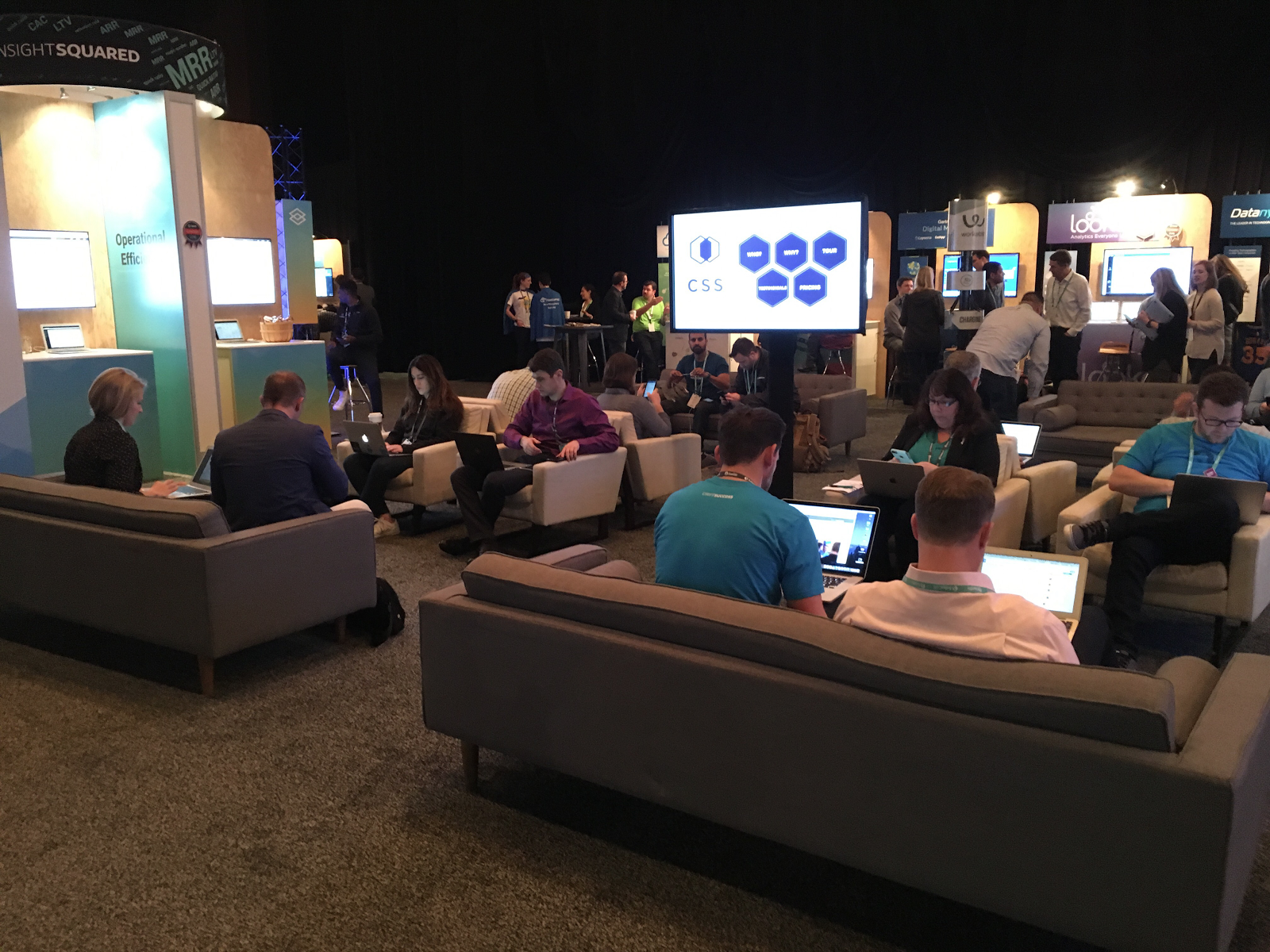 Lounge corners were scattered all over so it was easy to do a little work or make an impromptu meeting with a local VC.

And of course, the parties were on the same level, with an open bar and appetizers in abundance.

As you can tell, the sponsorship of the conference was pretty hefty, the only things that were in short, were the number of expense reports.

SasStr Annual has everything to do with the success story for Americans: 3 years ago the conference gathered barely 2000 people.

Behind its success is one of the eminences, Jason M. Lemkin sector. 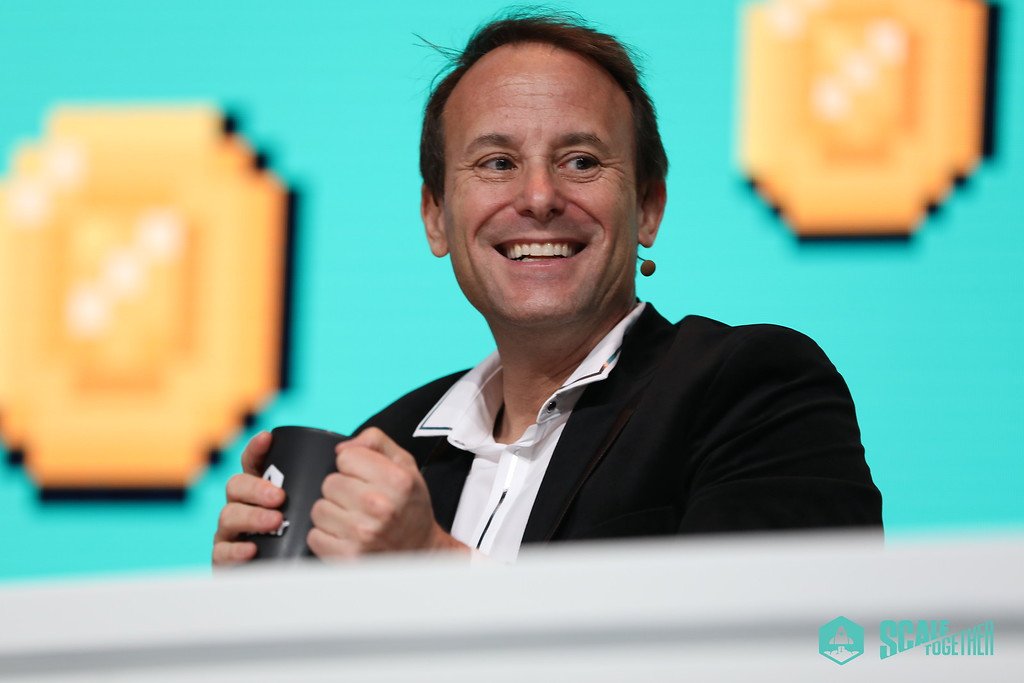 His story sums up the typical dream story of an entrepreneur with west coast success: after selling his startup, EchoSign, to Adobe, he became one of the most respected VCs of Silicon Valley in the field of SaaS and invested in many companies in the sector with his Storm Ventures fund.

Beyond these activities, he is a recognized apostle of the SaaS subject, and the articles of his blog are read and re-read by all the speakers in the field.

And since SaaStr doesn’t seem to take up all his time, he has also recently opened a co-working space dedicated to SaaS startups, called (it’s not made up) the CSS (Co-Selling Space). Probably a good way for the investor to spot future potential to add to his collection.

Conveniently located 10 minutes from the conferences, there are free shuttles to take the participants to the co-working space. To sum it up, when it comes to being pulled by a string, you can count on Jason!

OUR LITTLE BOOTH, OUR BIG PERSPECTIVE

Practically unknown in the US, we decided a year ago to sponsor the conference. We were curious to introduce our product and confront the reality of visitors from the US and around the world.

For memory’s sake and not to impose a sales pitch on you, Sellsy is a SaaS solution that can replace up to 15 other SaaS softwares, a pitch not necessarily useful in France where the world of SaaS is still starting off. The question was: what will be the power of our pitch in the heart of the top of the top of the SaaS ecosystem?

We were not disappointed! Unlike France, where the sale of software in SaaS is moreso just about converting people to the concept itself, we found ourselves confronted with users already completely comfortable with the idea ("Yeah, I'm using Marketo, Salesforce, and Zendesk. What can you do for me? "). 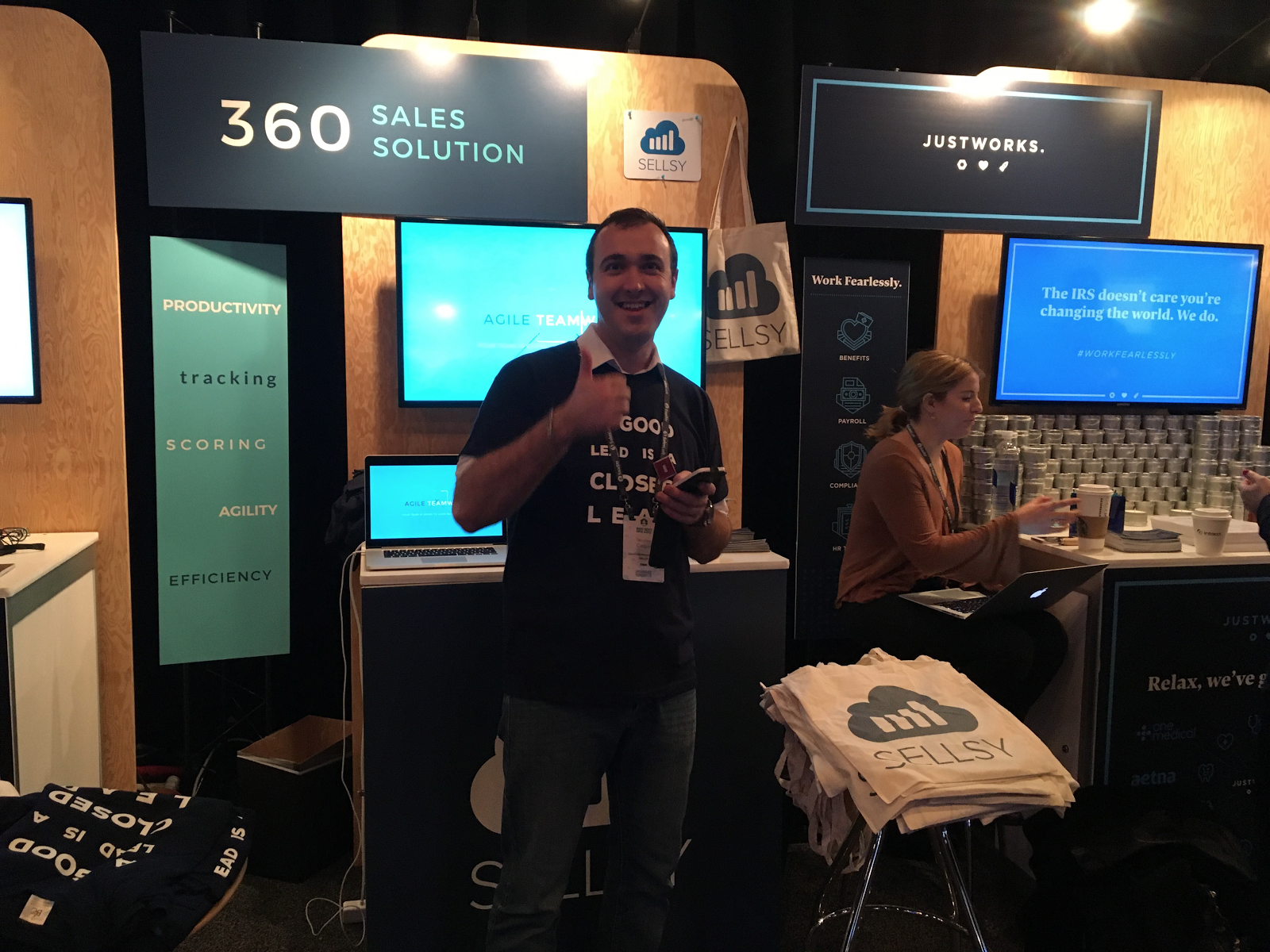 We were on Salesforce’s territory. They were everywhere, practically covering the entire landscape.

The reception of our pitch was excellent. We came back with over 150 leads, which is a considerable amount in our experience, especially since it’s our target market.

OUR ASSESSMENT: A GOOD SHOT OF ADRENALINE

Another observation verified on the spot: US sales methods are much more aggressive and straightforward than what we know in France.

The competition is raging and does not hide. An electronic signature company does not hesitate to display "Still Docusigning?" enormously on its stand, referring to Docusign, the industry leader.

(It's also amusing to note how SaaS applications become verbs in the US, hearing "I'll slack it to you" is super common).

We were able to work a much more direct pitch, which we tried to retranscribe in the slides below (while it's fresh in our minds). 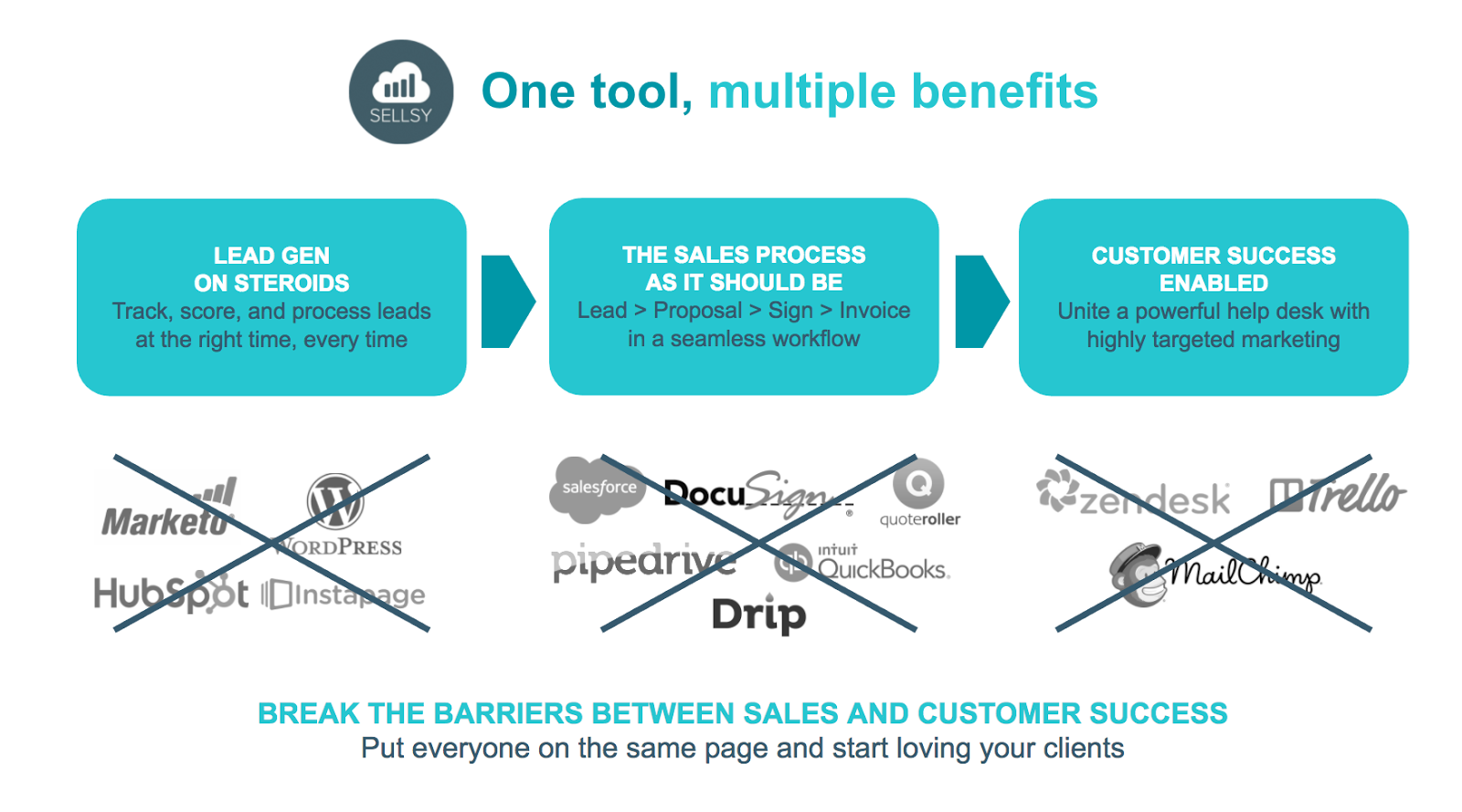 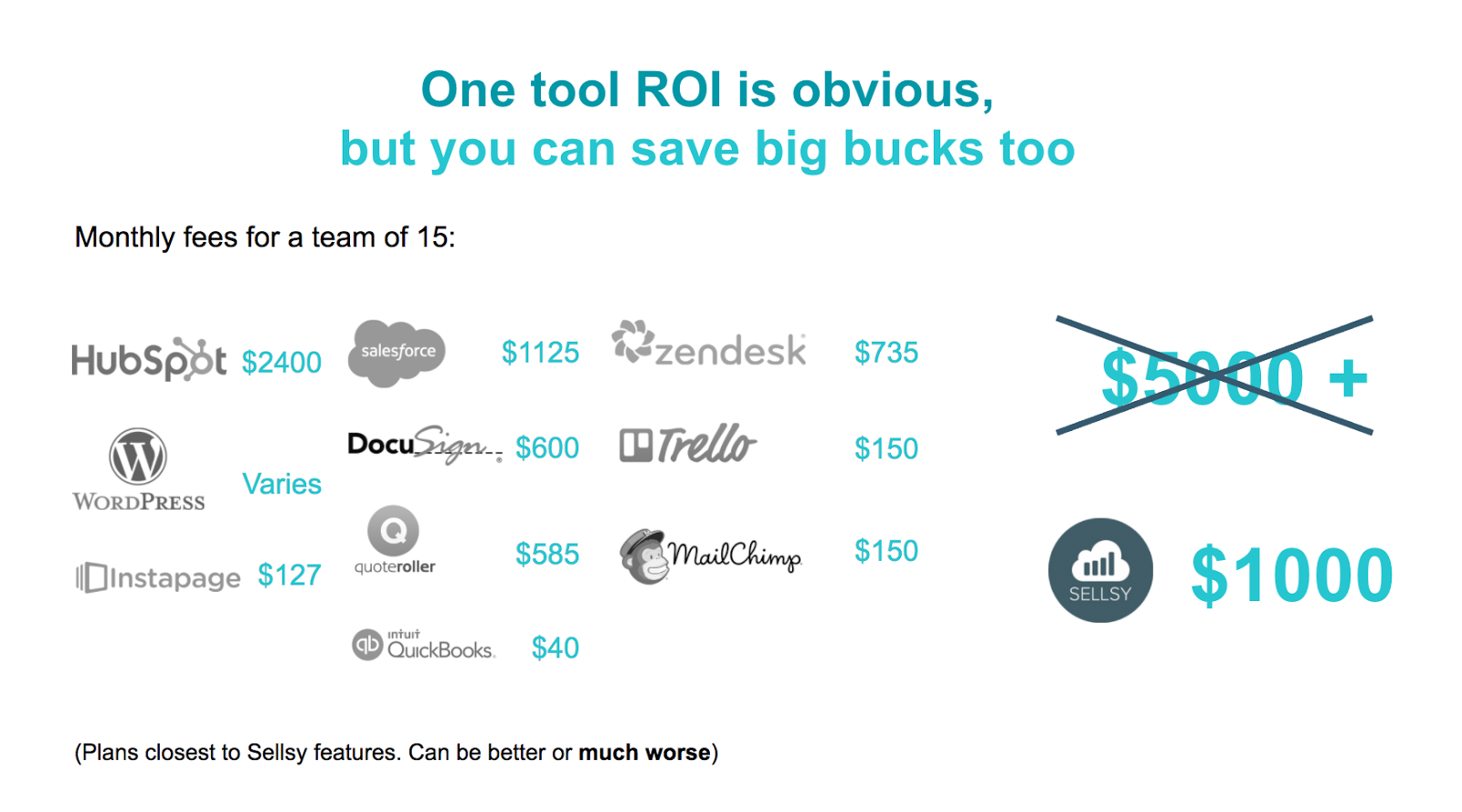 As you can see, it’s a simple and direct comparison. In a market where all companies use at least two of the solutions cited, the value of our proposition is easy to see.

When you see this type of event, and like the Web Summit, it makes you wonder how it will be even bigger the next year (for those who follow, yes, they change the scenery of the big stage every day).

In any case we will be sure to be a part of the game next year, and I invite all my colleagues of SaaS to ask themselves the question.

It’s expensive, it’s far, but it’s so worth it!

Ps: If the SaaS interests you, I often talk about it on Twitter :)

Be informed by email of our latest publications to miss nothing.